From the Ground Up

Tropicana Field in St. Petersburg, Florida, knocks it out of the park with a stunning stadium transformation, opening Enchant Christmas in November, just a month after the Tampa Bay Rays’ last American League playoff game against the Houston Astros.

The Rays extended their season into October, scoring 96 wins to make the American League playoffs for the first time since 2013, then pushed the Astros to five games in the series. Just look how amazing the field looks in this Oct. 7 @StubHub Twitter post.

On deck for the field a few weeks later was Enchant Christmas, a massive and immersive holiday light maze, ice skating trail and market dubbed by organizers as the “ 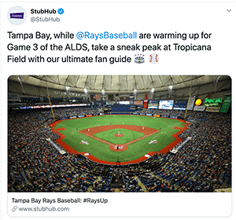 World’s Largest Maze.” St. Petersburg is just one of three U.S. cities to host such an event.

So what’s in it logistically for a stadium to make such a major transformation? Tropicana Field features an artificial surface with all-dirt base paths, so in order to host an event, the playing surface — even postseason — needs to be protected from damage. 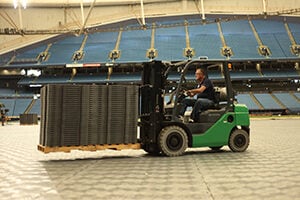 Enter Signature Systems’ OmniDeck™, an innovative stadium turf protection system. OmniDeck™ protects stadiums like Tropicana Field from the high traffic of large events with benefits including superior strength and fast and easy installation. LinkedIn posts from stadium officials showed the beginnings of the transformation with Dasher the reindeer among the first to step foot on the protective OmniDeck™ flooring system.
Click on photo above for the OmniDeck™ installation video. 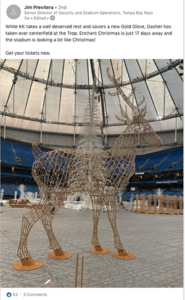 Yet nothing compares to seeing the “downright magical” display for yourself. If you're not in St. Petersburg to experience in person, watch the Fox 13 News Tampa Bay video below for the full effect. 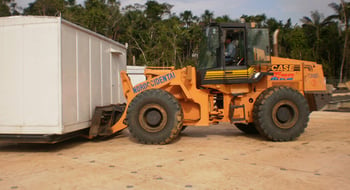 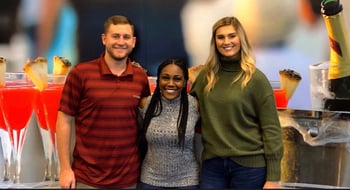